Remotely, we were able to put the repeater into Carrier Squelch mode (“CSQ”), and listen. It was immediately clear these were not off frequency signals of FRS users, but rather on frequency commercial operators.  Commercial operation under part 90 is not permitted on this frequency, and stranger still, there appeared to be multiple operators using this as both and input and an output for their repeaters.

There is not much GMRS users can do to have these users shut down in the port, as these users come and go as fast as they can offload their cargo at the port. Perhaps asking the port authority to have ships curtail their use, however most are unaware of the channels they are on.

Our repeater is not on a duplexer, but rather a split TX/RX antenna system.  The transmit antenna uses a RF combiner consisting of tuned circuits to combine multiple transmitters onto a single antenna. The receiver antenna has dual 4 MHz wide filters on centered 458 and 468 MHz feeding a low noise, high gain pre-amplifier and then receiver multi-coupler. This provides some frequency flexibility as the transmitter frequency cannot easily be moved, but the receiver frequency may be moved.

Our tech committee has enabled scanning mode on the receiver.  It will listed on 467.5750 141.3 Hz and 467.7250 D546, and scan between these frequencies.  This does introduce a slight delay when using the repeater, but most users should have a half second delay upon key-up before starting to speak as this is good radio practice.  Note the P25 NAC is still 0x575 on both.

What many users do is program “Tampa 575 FSG” and “Tampa 575 FSG'” in their radio, with the prime channel being the alternate input. Some purpose built GMRS radios may not support this or likely support it but must be programed via a computer to do it.

ITU–R M.1174–3 – Technical characteristics of equipment used for on–board vessel communications in the bands between 450 and 470 MHz

We’ve repurposed an older commercial repeater into a GMRS repeater on 462.575 at our Tampa Site.  This is proving to have great coverage in the Tampa Bay area and already has had a bit of activity.

This repeater support P25 phase one as well, which is unique in the Tampa Bay region.  We encourage everyone to use PL on their receiver and listen before transmit.

The coverage below shows the 39 dBu signal level for 50% of the time at 50% of locations 6′ off the ground.  This is roughly the expected mobile range of the system for a good voice quality.  Into a typical 1/4 wave receiver antenna, you should expect a -95 dBm signal in the blue areas. 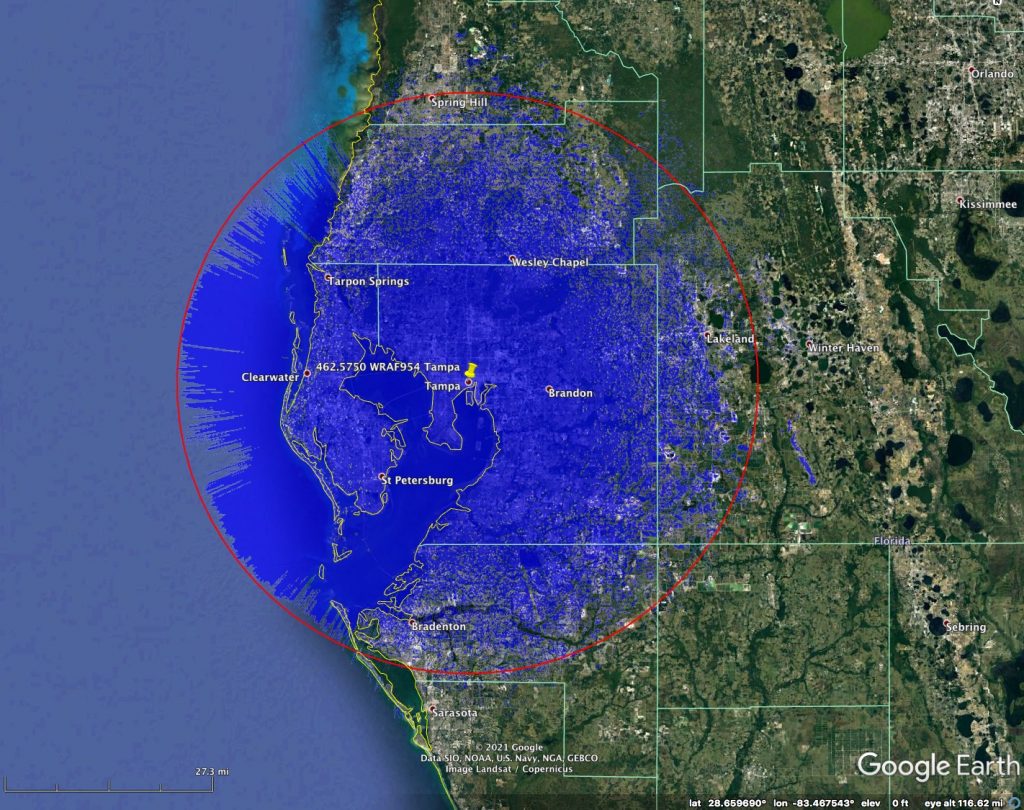